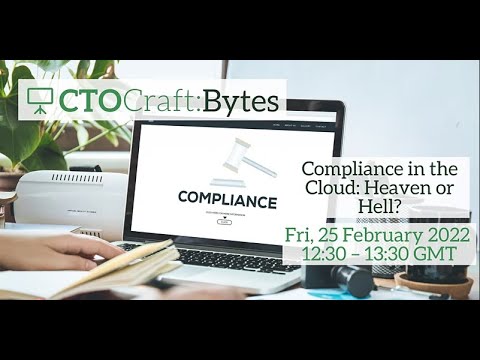 Compliance in the Cloud: Heaven or Hell?

This panel discussion brought to you by CTO Craft will discuss: Compliance in the Cloud: Heaven or Hell?

In the face of stiff competition, especially when disrupting markets dominated by large albeit stagnant companies, time to market is truly of the essence. Speed and agility in bringing an MVP to production faster than the incumbent takes to schedule its first meeting to try and figure out who’s eating their lunch, is arguably the best and sometimes the only weapon startups and scaleups have at their disposal to seize on an opportunity. Indeed, releasing to production and fixing shortly after has been at the centre of innovation for over a decade but when it comes to highly regulated industries, the playbook created by the likes of Facebook, Google and Amazon needs a tweak.

How to Turn Your Engineering Team from Good to Great

Roadmaps and OKRs Don’t Have To Suck

If you would like to connect with me on Social channels, links are below.

In a change to the scheduled lineup, I'll be talking with Ed Addario on @CTOCraft Bytes on Friday 8th July on Hiring Approaches For New Startups at 12:30pm (UK time).
Hope to see you all there.

Another great CTO Craft Bytes session I am MCing this coming Thursday.
"How to Turn Your Engineering Team from Good to Great" with Rob Zuber and Sonal Rattan.
How can we actually prove that we have a great team? Tune in to find out.
https://www.eventbrite.co.uk/e/cto-craft-bytes-how-to-turn-your-engineering-team-from-good-to-great-tickets-225243237587
#ctocraft #greatteams

On Friday (11th March) I will be moderating another CTO Craft Bytes event on "Roadmaps and OKRs Don’t Have To Suck" with Janna Bastow and Dhanya Jayachandra.
https://www.eventbrite.co.uk/e/cto-craft-bytes-roadmaps-and-okrs-dont-have-to-suck-tickets-247319207407